Ms Tagalong was in an even greater state of agitation than normal as she waited for this month's FoodiePenpals parcel. The lovely Nicole had promised a selection of goodies from far and wide as she had been travelling for work.

Ms Travelong's travels to see all things sustainable within her grasp had sent her to the far reaches of North Wales.

No, that's simply not true. The little princess and Ms Pollo Piccolo from Market Day in Calitri fame had decided to get married and celebrate the little princess's birthday all in the same weekend. So the full box of surprises was waiting for me in Glan Conwy.

In between the wonderful wedding celebration weekend at Caer Rhun Hall Ms Tagalong managed to sneak a peek and just loved how personalised Nicole had made her parcel! 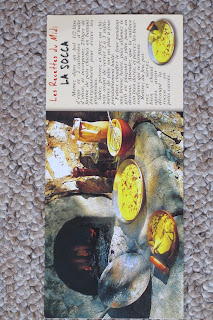 Everything was neatly numbered and elucidated in a long letter. There was a recipe card from Nice and a postcard from Poland showing Oscypek, a smoked mountain cheese which Nicole was lucky enough to sample...and that's before Ms Tagalong got to the 'good stuff.'

A pot of cherry compote which although Ms Tagalong and Mr Ideasman sampled on some caramel tasting pain d'epices is just begging Ms T to make some more of those tasty quark pancakes for which it was designed. A mildly sweet concoction to contrast with the cheese.

The delicious lozenge-shaped marzipan cookies were a great accompaniment to fresh coffee brewed at the back of the Bongo as we stopped after a scramble up a hill on the edge of Snowdonia. Mr Ideasman was panting. It was hot and sunny, 'Just like home,' he said. Maybe Summer had come. 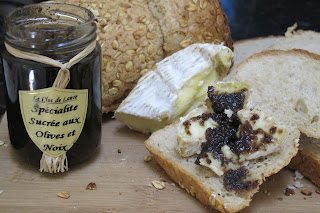 p.s. Ms Tagalong had said she liked anything with almonds, she thinks she will amend that to say anything with marzipan or just marzipan!

A pot of tapenade came in very useful to add that distinctive olive taste to some pedestrian cheese sandwiches and the sweeter concoction of olives and nuts, a speciality of the region, could be consumed by Ms Tagalong until the cows come home! Better move out of a rural region!

A mini bottle of apple aperitif is cooling in the fridge ready to be poured on ice for a special occasion and a pack of French herbs for fish is also awaiting the next fish meal.

Ms Tagalong would love to thank Nicole for her lovely box and as she does not have a blog she may later write something to put on this one.

If you wish to see the items Ms Tagalong sent to her penpal. Click here.

It's great to have some feedback, so please leave me some comments.
Posted by Minimbah at 11:44 PM 4 comments:

“It's a bit like Amazon,' said James,'the transactions are between the producers and the customers.'

We are facilitators, explained Tracy, who has been hatching this idea for several years with a year of frustrating red tape and paperwork to bring it to recent fruition.

This passionate couple are providing a marketing online outlet set to rival Waitrose and Tesco. Shop online? Then give this a go. Travelling to another part of the country and want to purchase well-sourced goods? Give it a try. Tracy went on to explain how the many small farmers of produce down narrow lanes, like the hedgerow foraged jams Ms Tagalong was eying up or the upcycled copper wire welcome signs perfect for a special friend's B & B, simply do not have the time to market and promote their goods or perhaps even have the digital expertise. And the ability to market nationally seems insurmountable.

Not to this team, who have been nurturing their endearingly named Beaminster Bottom Farm for 13 years. Lamenting the loss of carpet making skills in Britain when Tracy was designing rugs utilising her angora goats' hair, she became aware that farming is deeper than food and that is why all products on their online site exhibit a strong link to the land, display a green ethos and produce a low footprint.

As if this is not enough to get on with, the couple have built a fabulous passive solar eco house about which Ms Tagalong tried to appear so knowledgeable. Mr Ideasman would have loved the plywood ceilings and asked far more pertinent questions.

Their children are soon to be launched video stars in a film for their website. Watch this muddy carrot who is sure she is local!

It's great to have some feedback, so please leave me some comments.
Posted by Minimbah at 12:43 AM No comments: 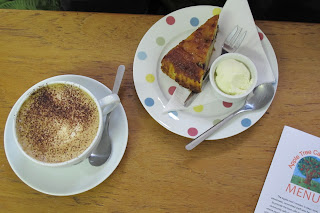 Working their way through the mist near Land's End the Apple Tree Cafe and Bakery loomed up. Ms Tagalong spotted the word 'community' and they parked.

A privately run community cafe owned by a local lady, Helen, who wished to provide a focal point for the area. Not only walkers and cyclists drop into this well-hidden cafe on the B road from Porthcurno to Land's End. 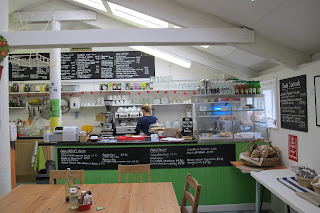 Besides great locally blended coffee and Clipper Teas there was a very healthy looking breakfast menu tucked into by a couple who had passed the place three times having been distracted by the posters about a deaf cat living nearby. Ms Tagalong enjoys spending the bank's money at places like this! Smiling she bit into the locally made biscotti and for a moment thought she was back in Italy! Mr Ideasman wanted more sustenance and the blueberry and almond cake with ice-cream fitted the bill nicely. It disappeared so quickly while Ms Tagalong was writing that she didn't even taste a morsel. The speed of its consumption attested to its goodness.

So here they were sat on comfortable sofas with apple-green throws admiring the art displayed by the Land's End guild of artists. A notice displayed offers Knit and Natter, art classes, dining clubs and an Archer's Addicts Sunday morning. Would that Ms Tagalong were there on a Sunday. A veritable hub for meetings and socials for tourists and locals alike. A great alternative to the grossly commercial Land's End Theme Park just down the road.

With glee Ms Tagalong spots a brochure on a share offer for a Community Farm at nearby Bosavern. In fact they supply the cafe with produce. 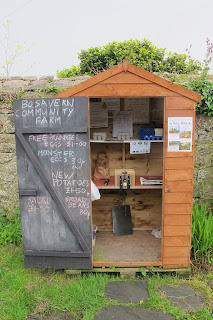 Down a few misty, wiggly lanes they pull up at the produce shed for the farm. A knock on the farmhouse door finds two Woofers having their morning cuppa. Both American they are there for a few weeks volunteering their time. Weeding onions in the rain obviously wasn't proving fun and they sat and chatted until Hugh turned up from St Just where he had been to do some shopping. Not vegetables Ms Tagalong hastens to add. Two fields of veg and several polytunnels of produce made sure of that.

Hugh explained that their mission was to stay local, to increase their veg box orders from 15 to 30 or 40 just in the neighbourhood of St Just and Pendeen. The Apple Tree Cafe was the only commercial venture they supplied but all boxes are picked up from the farm itself.
Local volunteers help keep the farm running but Hugh is the powerhouse, running the organic farm, manning the internet and blogging. Read on his website ways to try to raise money. Ms Tagalong was particularly taken with the 'Sponsor a Chicken,' initiative for a poultry six pounds. Ouch! and you get invited to an egg-stravaganza! Great idea. 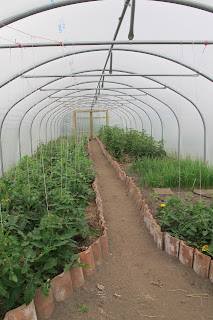 Their share offer has gone global but some ex-Cornwallians in New Zealand don't seem to have taken up the cudgel and they are still short of the amount needed to buy the farm they are using. Ms Tagalong and Mr Ideasman took a toddle to see the veggies, the chickens in one field and the pigs in two. So anyone out there reading, with Cornwall connections or not, log onto their website and buy some shares in this very worthwhile venture.

It's great to have some feedback, so please leave me some comments.
Posted by Minimbah at 10:58 AM No comments: